ArcelorMittal’s Geert Van Poelvoorde has spoken out in defence of Europe’s steel industry, underlining its importance to the wider European economy and calling for greater use of trade defence instruments. Speaking on European Steel Day, in his capacity as President of Eurofer, he said: “Logically, there is no reason why steel should not be produced here in Europe, for many decades to come. Our steel industry is truly world-class. In many cases, our steel mills are the benchmark for global industry excellence and productivity”.

“We are the cornerstone of the manufacturing sectors in many EU member states, with an annual turnover worth an estimated 1.3% of EU GDP”, he added. “Investment in steel is also one of the main multipliers in the economy. Every Euro of demand for steel products creates additional demand worth €3.1 to society, of which €2.1 goes to other suppliers”.

Despite this, Mr Van Poelvoorde, who is executive vice president and CEO of ArcelorMittal Europe Flat, reminded delegates of the tough times Europe’s steel industry is currently facing, with 7,000 fewer steelworkers in Europe today than there were last autumn. Since 2008, more than 85,000 jobs have been lost.

Explaining the reasons for the current challenges, he pointed to global overcapacity in steel production as the main issue: “Fundamentally the steel industry today is faced with a very low-price environment, largely caused by overcapacity in China. As a result of declining domestic demand, China’s overcapacity is around 400 million t. China’s excess steel production is being exported into the international markets. The EU market has proved particularly vulnerable compared to other regions, with a surge of over 120% in imports from China since 2013”.

Mr Van Poelvoorde also detailed what Eurofer is asking for, in order to secure a future for Europe’s steel industry. “We are not asking for bail-outs – like those the banking industry received – to protect those companies which cannot be competitive. We support the argument that uncompetitive companies should restructure rather than look to trade defence.

“But what we can never accept are decisions or legislation that hand an unfair advantage to competitors in other markets, putting our own industry at risk”.

Setting out Eurofer’s position on the use of trade defence instruments, he said: “This isn’t about protectionism. It’s about the legitimate defence of an industry being severely impacted by unfair imports. The EU is taking too long to introduce final measures – about 16 months from the trade case being initiated. Moreover due to the lesser duty rule, the level of tariffs is considerably lower than in other markets. For example, the US recently applied a tariff of 266% on cold-rolled coil, compared with tariffs of 13 – 16% in the EU.

“Without going into more detail, both of these issues need to be addressed if Europe is to have tariffs that work. That’s why Eurofer continues to ask for the EU trade defence instruments to be made more effective and quicker to deploy”.

Van Poelvoorde also criticised the argument that raising trade tariffs will damage Europe’s downstream industries: “There are some who claim that the implementation of trade tariffs in-line with WTO legislation could put the downstream manufacturing industry at risk or out of business. They acknowledge that the steel industry employs hundreds of thousands of people but argue it is better to re-train those people and invest in industries that have a stronger future.

“I strongly disagree. Europe must have its own steel industry to satisfy the requirements of sectors that are important to the future of European manufacturing. Those who say having access to cheap steel is the top priority are enormously underestimating the value of steel. You can’t just buy quality steel from your local store.

“Most importantly, we must have a fair and level playing field – something that isn’t straightforward given the overcapacity problem that exists in the world today”. 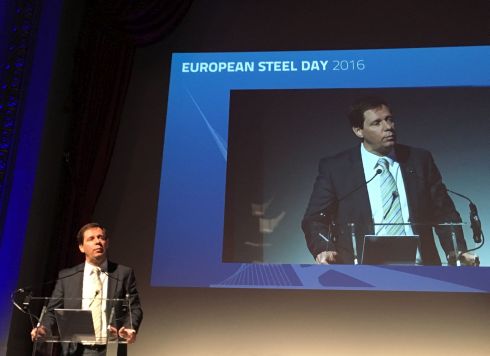