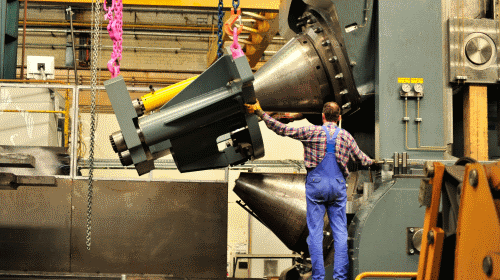 After its startup and testing in Siempelkamp’s production halls from April to October 2013, Siempelkamp’s first ring-rolling mill is currently being disassembled and prepared for shipment to the customer’s location in Russia.

Siempelkamp supplies the rolling mill to JSC Metallurgical Plant Electrostal including the complete hydraulic system, automation technology and the innovative SicoRoll control technology. The startup in Krefeld has proven that the plant not only meets the customer’s desired specifications but even exceeds them in some areas.

Siempelkamp experts not only completely manufactured the rolling mill at the Krefeld location but also assembled and started it up there as well as extensively tested the hot rolling proc-ess. With maximum radial and axial pressing forces of 6,300 kN each, the ring-rolling mill manufactures rings made of steel and special materials such as nickel-based, titanium and aluminum alloys. With a maximum outer diameter of up 4,000 mm and a maximum ring height of up to 600 mm, the rings meet the high requirements in the aerospace industry.

Preparations are currently underway for the shipment of the ring-rolling mill to Russia where it will be installed and started up next year.