This groundbreaking experiment helped to pave the way for the development of GPS technology. High-tech fused silica from Heraeus made this reflector possible in the first place.


Around 600 million people around the world held their breath in front of the television when Neil Armstrong took his first steps on the lunar surface in July 1969. But after Neil Armstrong and Buzz Aldrin left the moon exactly fifty years ago, the scientific part of the Apollo 11 mission continued. The two astronauts left behind a laser reflector made of Heraeus fused silica, which is still in use today.

Progress in space – progress on earth 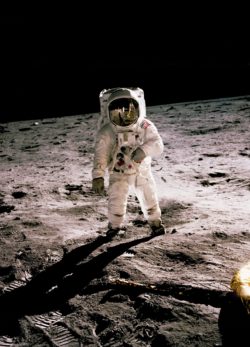 Armstrong's "giant leap for mankind" was also a milestone for science: The laser reflector makes it possible to measure the distance between the Earth and the Moon with an accuracy of just a few centimeters.

That’s how it works: A laser beam is directed from the earth to the reflector, which reflects the light precisely to its origin. On Earth, the returning light can be measured, and the distance can be determined by calculating the travel time. The father of this unique experiment – known in scientific circles as Lunar Laser Ranging – is Dr. James Faller. He first developed the idea during his time at Princeton University in the late 1950s.

The moon landing was a quantum leap for science: As far as knowledge about the universe is concerned – but also knowledge about the Earth. The experiment helped scientists to gain essential insights into real-time accuracy that is essential for a space-based GPS system. In order for satellites and ground stations to synchronize, it is necessary to understand the gravitational forces affecting the orbits of the Earth, the Sun, the Moon and space probes.

"Dr. Faller's work was invaluable for the later development of GPS technology," says Dr. Todd Jaeger, former NASA employee and now Global Sales Director of Commercial Optics at Heraeus Conamic in the US. "If the laser reflector experiment had not been selected for Apollo 11, it is doubtful that the development of GPS would have progressed as quickly as before."

The added value of GPS technology for the economy is immeasurable. A recently published study commissioned by the U.S. National Institute of Standards and Technology (NIST)* concludes that 1.4 trillion US dollars have been generated with the Global Positioning System (GPS) since its introduction in 1983 – more than 1000 billion US dollars of this since 2010 alone.

A piece of Germany in space 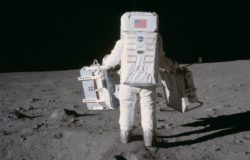 Astronaut Buzz Aldrin carrying a reflector on the moon. © NASA

The laser reflector consists of 100 fused silica triple prisms or corner prisms manufactured by Heraeus in Hanau. Originally, the reflector was developed according to NASA requirements in order to remain in operation for ten years. The outcome: On the 50th anniversary of the moon landing, it has far exceeded its expected life span.

One of the main reasons for the reflector's performance is the high-purity and extremely homogeneous fused silica from which Heraeus manufactured the 100 reflectors. High-purity fused silica is one of the few materials that can withstand cosmic rays and extreme temperatures.

No wonder NASA relied on fused silica from Hanau in 1969. The resistant high-tech material is still used today in numerous space projects. For example, in ESA's GAIA space probe, which is currently producing the largest three-dimensional map of our Milky Way.

"In 1962, US President John F. Kennedy based the lunar mission on the pursuit of knowledge and progress. For the last 50 years, the laser reflector has made this vision come true," says Heinz Fabian, Global Head of Heraeus Conamic. "We are proud to have been part of this historic mission."

A globally leading technology group, Heraeus is headquartered in Hanau, Germany. Founded in 1851, it is a family-owned portfolio company which traces its roots back to a pharmacy opened by the family in 1660. Today, Heraeus combines businesses in the environmental, energy, electronics, health, mobility and industrial applications sectors.

In the 2018 financial year, Heraeus generated revenues of €20.3 billion. With approximately 15.000 employees (including staff leasing) in 40 countries, the FORTUNE Global 500-listed company holds a leading position in its global markets. Heraeus is one of the top 10 family-owned companies in Germany.

With technical expertise, a commitment to excellence, a focus on innovation and entrepreneurial leadership, we are constantly striving to improve our performance. We create high-quality solutions for our clients and strengthen their long-term competitiveness by combining unique material expertise with leadership in technology.